Finally author Debra Webb's seventh book Vicious in the Faces of Evil series is on its way and she is here to celebrate! 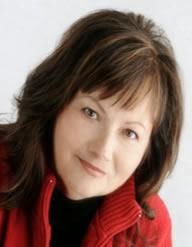 Debra Webb was born in Scottsboro, Alabama, to parents who taught her that anything is possible if you want it badly enough. She loved telling stories and began writing at age nine. Growing up on a farm in rural Alabama provided the wide open spaces and fertile ground for her vivid imagination.

When she met and married the man of her dreams Debra put her writing aside and tried some other occupations, including door-to-door sales, various factories and restaurants, a day care center, a hospital and a department store or two. Shortly after the birth of her first daughter Debra’s husband joined the military and she decided to go to college. Eventually the U.S. Army took them to Berlin, Germany, and Debra accepted a position as secretary in the commanding general’s office. By 1985, they were back in the States, and her next major career move landed her at NASA in the Space Shuttle Program.

For more than a dozen years after returning to the States Debra and her family lived in a small Tennessee town where everyone knew everyone else. A few years after settling in Tennessee her second daughter was born. Though she hadn’t written in nearly two decades, in 1996 Debra took up writing again. With the support of her family and God’s blessing her dream of being published came true in March of 1999. Since then she has penned more than one hundred novels including her internationally bestselling Faces of Evil and Colby Agency series.

Debra’s life has come full circle now. She and her family, along with their beloved dogs, have moved back home to Alabama. As a multi-published, best selling author Debra writes spine-tingling romantic suspense and breath-stealing romantic thrillers.

Want to know more about the Faces of Evil series?

While she's visiting... let's take her captive and ask her a few questions shall we?

Tell us a little bit about yourself Debra.


I grew up on a farm in small town Alabama and I've been writing since I was nine years old! I married my first love and have two daughters. I love old houses and repurposing old things.


What do you do in your off time?

Most weekends my husband and I drive around checking out thrift stores and looking for junk to give new life! For the next month we'll be going to holiday open houses at antique store. I LOVE Christmas!


What inspired you to write the Faces of Evil series?

I watched a special on the Levels of Evil. I was enthralled! I wondered what it would be like to write a series where each story climbs to the next level of evil. Each book focuses on a more evil villain. Each book also picks up right where the last one left off. For example, RUTHLESS left off on Sunday morning, VICIOUS starts a few hours later.

What do you like most about writing the Faces of Evil series?

The characters! The whole cast is like family to me!

Have you ever had any difficulty writing any of the Faces of Evil books? (What did you do to get over the issue if there is/was one?)

The third book in the series, POWER, was a little difficult to write because OBSESSION and IMPULSE had done so well and I was terrified I wouldn't be able to make the third book good enough. To get past it, I just put my nose to the grindstone and worked!

How do you come up with the thrilling plots for each book?

Oh gosh, I spend a lot of time thinking about various methods of murder and the reasons someone might do such a thing! My husband is my partner and he helps me a lot!

What's in the future for the Faces of Evil series?

After VICIOUS there are five more books in the series and then I'll be doing a spinoff series!

Which Face of Evil book in the series was your favorite and if you could ask Jess Harris one question, what would you want to ask her?

I love them all but I have to say OBSESSION. Three years ago I was in an accident and lost use of my right arm and hand. It was devastating. I thought my career was over. The medical  bills were massive and we had no idea how we were going to keep our home much less pay the medical bills. Good friends came to the rescue. They urged me to publish the first couple of books in the Faces of Evil (A series I had started years before). So, I did. I published OBSESSION on October 23, 2011. By December 8, 2011 it had gone into Amazon's top 100 romantic suspense and it stayed there for six months. That book saved us financially!

I think I would ask Jess how in the world is she going to stop Eric Spears? LOL, even I don't know the answer to that yet!

Thank you Debra for spending some time here with us and for cooperating while we tied you up and interrogated you. You did beautifully and we hope you visit with us again in the future.

Where can I find Debra?

Want to buy one or all of the Faces Of Evil books?
You can find them here. 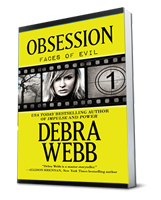 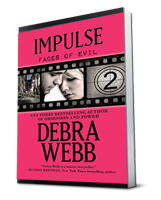 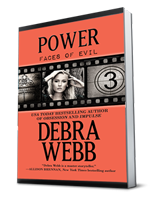 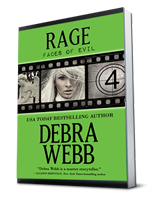 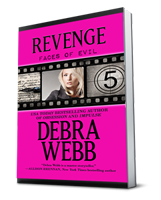 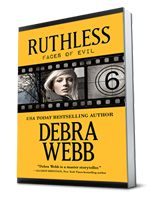 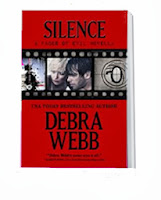 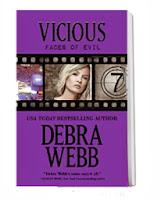 (Right now only Amazon has links up for Vicious. When the other stores post their links, I will update the site with the other availabilities.)

Because Debra is such a fab person, she is offering a free print or digital copy of her latest novel Vicious (due out November 25th) to a random commenter!

So tell us, which Face of Evil book in the series was your favorite and if you could ask Jess Harris one question, what would you want to ask her?

Winner will be announced November 25th!


(Don't forget to leave your email at the bottom of your comment so that we can contact the winner.)

AND THE WINNER of the Debra Webb giveaway IS.....

(Please contact Debra Webb via email at debraewebb@aol.com so that you can let her know what format you prefer print/ digital and where to send your prize!)


Thank you to everyone that took part of the Debra webb new release giveaway!

Come back again, there will be more features and giveaways with more guests! That means more chances to win great stuff!
at November 17, 2013 17 comments: