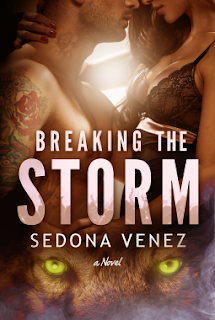 A fae witch, a rock star, and a passionate paranormal affair…

Stormy is cursed. If the fae witch ever finds true love, the man is sure to die a terrible death. Five years ago, she left her sexy rock star of a boyfriend Knox to save his life.

When her escort service for paranormals puts her face to face with Knox again, her passion grows like never before. Can she possibly keep it together when Knox insists that she be his escort? Will her curse make it all fall apart?

Breaking the Storm is the first book in the Credence Curse Saga, a series of adventure-packed shifter romance tales. If you like dark magic, powerful women, steamy love scenes, heart-pounding romance, and piles of sexy shifter secrets, then you'll love the latest romp from author Sedona Venez.

I was betrayed. My only warning was the chilling howls before the mangy wolf-shifters—Tiber Alfero’s warriors—cornered me like a pack of wild dogs snapping and snarling. I knew what they wanted…for me to go with them peacefully. Hell no! That wasn’t going to happen. Capturing me would be like herding stray cats—impossible.

As they surged forward, I mounted an attack that shocked the hell out of them. What started out as a routine mission to retrieve “the crazy Credence Fae-Witch” turned into an all-out battle to capture me without adding a body count… Mission impossible.

I was a vicious fighter. Something they should’ve known since my family was one of the deadliest around. They quickly paid for their naivety when I ruthlessly put down five warriors, leaving them writhing in pain on the ground. Not to mention the two warriors who won’t be able to walk straight or have sex for a couple days from my cringe-worthy blows to their groins. Body count…seven for me, zero for the wolf-shifters.

More warriors rushed from the shadows, making the battle wage on longer than I was comfortable with. Tired, I made the fatal mistake of taking my eyes off them for less than a second, when I was nipped on the ankle, causing me to fall forward clumsily. Disoriented by the pile of shifters that wrestled me to the ground, I could do nothing when they cunningly slapped the thick, gold metal cuffs around my wrists. The invisible chains of magic tightened around me, binding my powers. Double damn… I was outsmarted by a pack of wolves. Zero for me, one for the wolf-shifters.

Hopelessly, I recited the teleport spell I’d used a thousand times. Nothing happened; my powers were gone, which was a disorienting feeling for a witch who relied on her powers as a backup plan to get out of dangerous situations. And this situation was as dangerous as they came.

His warriors roughly pulled me to my feet. I almost swallowed my tongue when a larger-than-life wolf stalked out of the shadows. Shit, I was in big trouble. The Council summoned none other than Tiber to get me. His sea-green eyes were fixed on me as he circled me, snapping and snarling, a warning for me not to move. A warning that I smartly heeded as I tracked him carefully with my eyes…wary of any sudden movement. I gritted my teeth when he snorted sardonically before shoving my legs with his wide, cold nose, sending me crashing to my knees.

Resenting his gesture of dominance, I shouted, “Shift back, wolfman, and I’ll show you who’s the boss.” My fingers clenched and unclenched, ignoring the pain of the cold cuffs biting into my wrists. He growled, nudging me again, this time harder, sending me sprawling onto my back. His body shook violently as he transformed into human flesh and bones. Tiber stood before me, not as a wolf, but as a very naked, tall, golden-tanned muscular man. His hard, square face was grim; his shiny black hair flowed wildly down his back. A large, black wolf tattoo, the trademark of his bloodline, covered the left side of his massive chest. Its fluffy tail swirling down and wrapping around his well-defined waist. My eyes lingered a little too long below his waist, gawking at what was between his legs. Damn, this man was hung. What a tragedy it was all wasted on Bianca, the psycho she-wolf.

He nodded, prompting two shifters, now also transformed, to pull me to my feet. My mouth twisted, looking at him boldly. “As much as I love a good show of masculine prowess…” I held up my bound wrists. “I must insist you release me right now! This is harassment, Tiber. I’ve broken no Other law.” Technically, not true, but he didn’t know that. Yet.

His lips curled up at the edges. He had no intention of complying with my demand, especially now that he finally had me just where he wanted—at his fucking mercy. Okay then, on to Plan B: fight like hell until one of us became the victor.

The vein pulsed along his wide jaw as he watched the not-too-subtle widening of my stance. “Don’t you dare try it, Solista.” His voice was deep and gravelly. His eyes narrowed as he absently rubbed the scar on his chin given to him by yours truly years ago during one of our many arguments. He knew I had no qualms about fighting dirty. Yes, it would be a bloody brawl that I had no chance of winning, but I refused to be a victim of circumstance. Besides, he had no plans to kill me. He needed—no, wanted—me alive. That much I knew. He stepped forward, invading my space, cutting off any chance of delivering a wicked kick to the groin.

Shit! Okay, on to Plan C: annoy the hell out of him.

“Must be serious if the leader of the Other Council has come to retrieve me.” I pursed my lips and stepped back. He reached forward, yanking my cuffs so hard I slammed against his slick, taut body. I struggled, locking eyes with him. The weight of his stare tried to force me to look away like every other woman in his pack, but I refused. I would never give him that power over me. He had enough as it was.

So I continued my war of words. “I would think you have better things to do, like the planning of your big mate-claiming ceremony, than to come to collect a defenseless witch whose only crime is taking a peaceful carriage ride on a cool winter evening.”

His warriors snarled, lunging toward me for my disrespect of their beloved Alpha. Impatiently, he waved them back. “Do you love him, Solista?” His voice was hard as steel. His accent was thicker, an indicator of how angry he was.

I tilted my chin defiantly. He had no right to ask me anything. Not after he broke my heart. “Why? Are you having second thoughts about me?”

Sighing heavily, he reached down as if he wanted to caress me in his familiar way. Stopping short, he abruptly stepped back. “Solista, why do you resent me for something that was inevitable?”

Oh, to hell with this. Taking my chances, I shoved him, running away at top speed. I barreled into the thick of the woods, flinching with every smack of a branch across my face. I refused to let him hurt me again. I was done with all his bullshit, especially after it was so easy for him to let it all go and turn his back on everything I offered him so freely. No more… I refused to have him twist my feelings for his gain…once again.

I really wanted to like this story unfortunately there were too many issues that prevented me from being able to finish this book.

I thought that the author had a great idea to build a great story on sadly I don't think that her homework was done on the erotic relationship that the characters sexual interests were built upon and I didn't feel that it related really in any way to the story as whole because she didn't explain any of the reasoning behind why they were that way.
The so so sex scenes that were included flopped for me because the dirty talk that was supposed to be sexy just wound up being insulting instead.
The plot that was supposed to build tension never really gained momentum at which point I gave up trying to finish the book for now.

I won't give up on the author or any future books for the series because I believe the author and the series have a great potential to make even better books in the future.

Krissys Bookshelf Reviews received a digital copy in exchange for an honest review from Netgalley. All thoughts, comments and ratings are my own.
If any of Krissy's Bookshelf Reviews has been helpful please stop by to like my post or leave a comment to let me know what you think. I love hearing from you!
Thank you so much for stopping by!